After "Hell Broke Luce" last week I decided to bring Tom back with one of his older tunes - and one of the few that my wife really likes.
Posted by Unknown at 11:33 AM No comments:
Email ThisBlogThis!Share to TwitterShare to FacebookShare to Pinterest
Labels: Friday Night Jukebox

Tom Waits has long been one of my favorite artists - from the smooth crooning of his early lounge singer style to his more recent, much rougher, more political screeching. Tom is, without question, the most played artist in this house and what I'm most likely to be listening to while I paint.
Posted by Unknown at 12:00 PM No comments:
Email ThisBlogThis!Share to TwitterShare to FacebookShare to Pinterest
Labels: Friday Night Jukebox 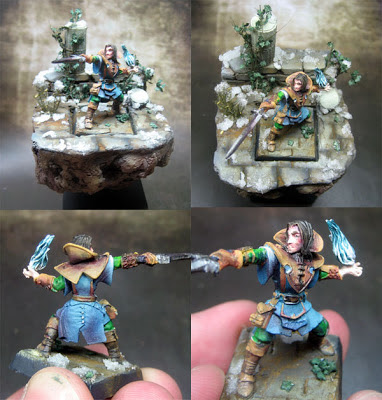 This model isn't technically finished, as I see some touch-up to do, but it's close enough that I thought I'd share it. I'm not sure who makes the model, although I think it's a Reaper piece. The model can be removed from the display for gaming -- and will go to a dear friend of mine as a surprise for his birthday. Don't worry, he doesn't follow the blog so it will still be a surprise.

He chose the model, the colours, and the setting which left me a bit of creative license on the execution but I otherwise tried to stick with his vision. I doubt that it will surprise anyone to know that this will be his D&D gaming model.

I had a lot of fun experimenting with this base and I'm pleased with how it turned out. I was worried that the foliage and snow would compete -- but I think the light application of both makes it work.

The sculpt itself was fairly good, although the face left a lot to be desired. This is another one of those sculpts with the classic smooshed face syndrome, complete with drastically lopsided eyes. Fortunately the funky side of the face is largely obscured by the armor.

And tomorrow I should be able to do the touch-up work, set this one aside, and make some room on my work table for something new. Or, you know, maybe finish something else....
Posted by Unknown at 6:01 PM No comments:
Email ThisBlogThis!Share to TwitterShare to FacebookShare to Pinterest
Labels: Basing, Finished Model, Painting


I've heard literally dozens of versions of this song, from every Irish and folk band I've ever come across, but this is the one that sticks in my head. It's hauntingly beautiful and one of the only songs that can hit my shuffle and actually get me to stop painting for a moment and just listen.
Posted by Unknown at 4:56 PM No comments:
Email ThisBlogThis!Share to TwitterShare to FacebookShare to Pinterest
Labels: Friday Night Jukebox 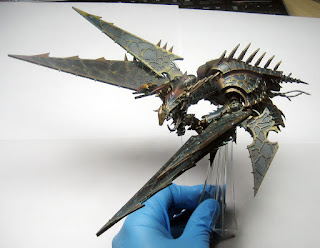 I was unable to meet the deadline for the 2012 charity project and so told the winner he could pick any one model for me to paint. This is that model. He wanted the classic black/bronze scheme but I took some liberties and went to town with the idea of weathered bronze. From assembly to this stage I'm probably 4 hours into the project. 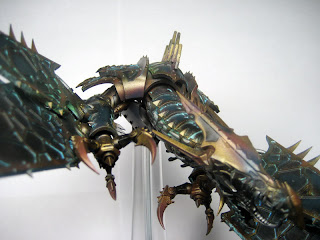 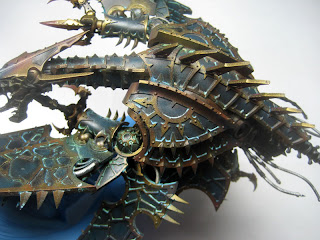 And now a quick review of the kit itself. First, I'm not a fan of the concept. While the other Demon Engines look like they were designed to function and then stuffed full of demon - this looks like a jet fighter that turned into a duck. That just doesn't do it for me. It is, however, an INTERESTING model and I like it more now that when I first saw previews. But I still don't like it.

The model itself is very well engineered - but also very fragile and very limited. Assembly was incredibly easy but I'm disappointed that while Games Workshop has been giving us more posable, dynamic models this one is really a fixed position, banking to the port, demon duck.

It is also the most fragile plastic model I can remember working with. The wings and neck are fitted with ball joints - and even a liberal application of MEK over a scored surface left me having to re-glue the model several times after only light handling. While I would generally pin a model like this the body is hollow, and the walls thin, so there's not much to be done.

The most disappointing thing for me, however, is the big open cavity in the back where the jet engine would be. It really looks like a trussed turkey from the back. Because there are exhaust ports on the torso, top and bottom, you can also see completely through the model from several angles.

Love it or hate it I'm glad to have had a chance to paint this - but don't expect to add one to my collection for anything but a must-have army item... and I'll resist that if I can. 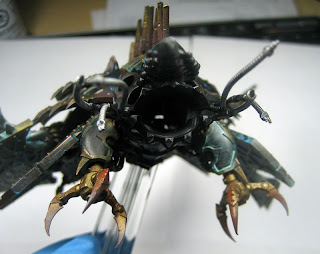 Posted by Unknown at 11:27 AM No comments:
Email ThisBlogThis!Share to TwitterShare to FacebookShare to Pinterest
Labels: Painting, Weathering

A couple of my favorite blogs, including my good friends at Massive Voodoo post regular music updates, and so I've decided to jump in and add the Friday Night Jukebox tag to the site. I'll use these posts to share workbench updates and some of the music I'm listening to while I work.

In this case a new find for me that I can't get out of my head.

More to come....
Posted by Unknown at 8:00 AM No comments:
Email ThisBlogThis!Share to TwitterShare to FacebookShare to Pinterest
Labels: Friday Night Jukebox