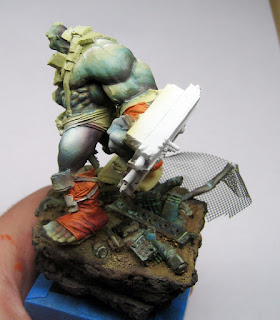 My 1:1 work with Mathieu Fontaine is focused largely on blending skin tones - and so we went for big colours on this guy. The model is perfect for it, with his seriously overdeveloped bulk and forward leaning pose. 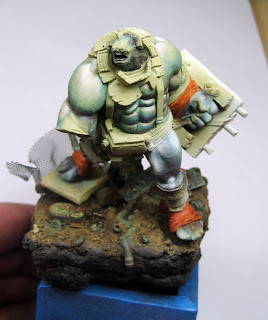 Given that so much of the model is blue and green I decided to add some blue to the base weathering - but then come back and use a dark orange for the fabrics. He doesn't have a lot of it so it shouldn't overpower. I will also be shading it in much the same way I did the skin to help tie the colours together. I will probably use the same orange on his goggles.

And here are some close-up shots of just the skin so you can see what I've been working on. You can also see the first shade on the orange of his left foot.

Posted by Unknown at 3:25 PM
Email ThisBlogThis!Share to TwitterShare to FacebookShare to Pinterest
Labels: Basing, Painting