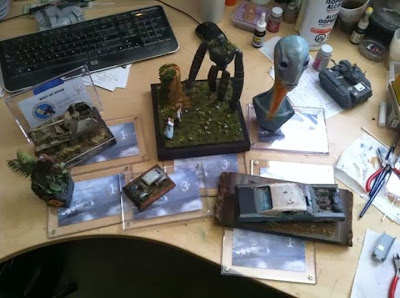 I had the pleasure of attending an IPMS Regionals event, and came home with my first "Best of Show" award -- along with 5 gold, and 2 bronze awards. One of the judges let me know that one of the bronze would have been a gold, but for a very, painfully obvious seam... which I had, of course, totally overlooked. Alas. Still, you won't catch me complaining as I hadn't expected that model (Castle in the Sky - Diorama) to even make the first cut.

I got some great feedback from the judges on several of my entries, and I'll make some improvements before the next show on those models that didn't place this time.

I have to admit that I was totally taken by surprise by the "Best of Show" award. I had already handed out the "Best Weathering" award (sponsored by Secret Weapon - so I got to hand it out) and figured my job was done for the day. They actually had to call my name three times to get me back up there. When I finally got to the stage we had a discussion that went something like this:

There was a fair big of laughter at this point as much of that was picked up by the live mic. Oops!

And now it's time to get on to the next projects, and keep right on painting.
Posted by Unknown at 12:04 PM
Email ThisBlogThis!Share to TwitterShare to FacebookShare to Pinterest
Labels: Competition