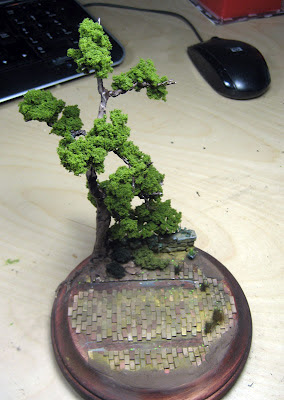 The first thing you should do when you're getting ready to approach a display model is think about the base and the setting. In the case of this project I completely failed to do that. I thought no further than using the shiny new baked ceramic bricks to make a road. I didn't even bother to consider that with a display this size 99.999% of the brick detail, especially the uneven treadway, would be UNDER THE TANK! 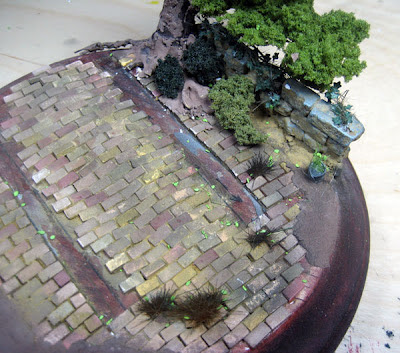 I didn't bother to consider the composition, colours, location... anything. And so this particular display has been a salvage project. I thought about what I would have wanted to do from the beginning -- and with the exception of the tank placement I have been somewhat sucessful.

First I added the wall. It's made from cut plaster and includes some creeping ivy.

Then I made the tree and added it to the base. I still need to apply some oil washes to help blend in the two bark materials -- which I also should have done before I added the foliage. Again, oops.

This project has been, more than anything else, an exercise in patience. I have been tempted to just toss it in the rubbish and start over. But I won't do that. I'm going to take it from where it's at and make it the best it can be. If nothing else it will serve as a reminder to plan out my other projects before I actually start work on them. 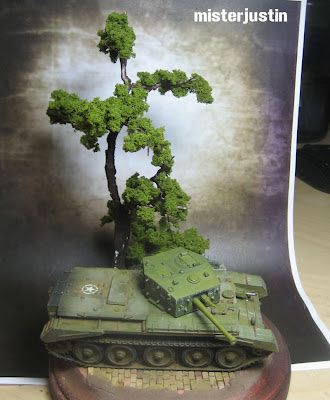 And besides, it's not BAD... it's just that it could be so much better.
Posted by Unknown at 9:30 PM
Email ThisBlogThis!Share to TwitterShare to FacebookShare to Pinterest
Labels: Basing, Thoughts